Prosecution is one way the Commissioner of Inland Revenue protects the integrity of the tax and social policy systems she is statutorily responsible for. It is an enforcement activity, usually of last resort, applied in conformity with the Solicitor-General's Prosecution Guidelines supplemented by these Guidelines, against those who refuse to comply with their tax or social policy obligations or who abuse benefits. The sanction of criminal conviction and punishment assures compliant taxpayers, who indirectly bear the burden of others non-compliance, that the Commissioner will take enforcement action against non-compliers.

These Guidelines set out:

These Guidelines are designed to ensure a consistent approach to IR prosecutions nationally.

The link to Inland Revenue's strategic goals and direction

Compliance for Inland Revenue is when customers pay the taxes and get the entitlements they should.

We want to help customers get it right from the start, rather than correct them when they get it wrong. Central to this is better understanding our customer’s needs and behaviours in a way that enables the Commissioner to consider and apply a much wider range of approaches to assist customers comply - being more proactive and making it simpler and more certain for customers.

Our new compliance model is part of Inland Revenue’s transformation journey and strategic direction. It comprises three moveable wheels that integrate customer behaviours (the inner circle), principles (the middle circle) and activities (the outer layer) in a way that helps us think more widely about customer needs and behaviours and tailor the compliance approach most appropriate for them. We recognise that most customers comply most of the time and we want to continue to encourage and facilitate this using our new compliance model to help build an environment that supports customers right from the start. 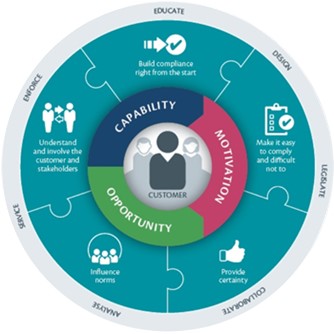 Unfortunately, some customers choose not to comply with their obligations or intentionally seek to mis-represent their personal or business circumstances in order to reduce the tax they are required to pay, or to obtain refunds, claims or entitlements they are not eligible for.  In these contexts, the Commissioner may seek to enforce compliance through prosecution actions as part of her statutory responsibility to protect the integrity of the tax and social policy laws entrusted to her.

These prosecution guidelines support these statutory responsibilities by describing the parameters that are designed to ensure prosecution:

The Commissioner may prosecute criminal non-compliance in the tax and social policy areas she administers (listed in the schedule to the Tax Administration Act 1994 [‘TAA']), consistently with s6 and 6A of that Act. She may also formulate, where appropriate, charges under other Acts, e.g. the Crimes Act.

The Commissioner works with other law enforcement agencies to deal with non-compliance. Subject to s18D of the TAA and relevant protocols, the Commissioner may refer cases to the Serious Fraud Office or the New Zealand Police.

Types of non-compliance that justify prosecution

Examples of non-compliant behaviours that may justify prosecutions are:

The Commissioner may also prosecute third parties for aiding, abetting, or conspiring in, the commission of criminal conduct or for inciting, counselling or procuring tax payers to engage in such conduct.

Voluntary disclosures and their effect on prosecutions

The Commissioner will not normally prosecute a taxpayer where the taxpayer has made a pre-notification voluntary disclosure as defined in section 141G of the TAA (SPS19/02 paragraphs 91 and 93) in respect of that person's tax position. This is not a rule of law, but a policy decision made to encourage voluntary compliance in the spirit of the reduction in shortfall penalty that accompanies a voluntary disclosure.

The Solicitor-General's Prosecution Guidelines emphasize several points of a prosecution system operating under the rule of law in a democratic society. The first is that the prosecutor must be free of pressure from sources not properly part of the prosecution decision-making process. The second deals with the prosecution decision itself. Under New Zealand's common law adversarial system, a prosecutor must be satisfied of two things: (i) that the Evidential Test is met, i.e. that there is evidence sufficient to provide a reasonable prospect of conviction, and (ii) that the Public Interest test is met, i.e. that only those breaches of the criminal law where the public interest warrants a prosecution will proceed to that step.

The Evidential Test is fundamental. There must never be a prosecution without evidence providing a reasonable prospect of conviction.

The Solicitor-General's Prosecution Guidelines on the Crown Law website includes an illustrative list of Public Interest considerations. They apply to all Inland Revenue cases. They are not repeated here.

In addition to the Solicitor-General's Public Interest factors, the Commissioner also considers the following revenue-specific factors.

Factors against prosecution are:

The choice of charges

Though generally the TAA is more suited to prosecuting tax evasion (Gilchrist v R [2007] 1 NZLR 499), some tax offending is better dealt with under the Crimes Act (R v Morris (2005) 22 NZTC 19,217). Many offences against the Revenue fall within the definitions of crimes in both Acts. The crimes in Part 10 of the CA are particularly suited to Revenue offending. They deal with generally dishonest conduct, including false representations, crimes involving computers and money laundering. Sections in other Parts may be used as appropriate.

The choice of charges depends on the evidence, the avoidance of technicalities and the ease of explaining specific crimes to juries. Public interest factors also bear on the choice of charges. A serious obstruction of the Commissioner may be more suitably prosecuted as perverting, obstructing or defeating the course of justice under the Crimes Act rather than obstructing the Commissioner under section 143H TAA.

Section 150 of the TAA authorises Inland Revenue, unlike other institutions with prosecution functions, to include more than one of certain TAA charges in a charging document. This provision is used for convenience and administrative ease, as revenue offending often involves multiple repeated conduct, in which only the date of offending is materially different. Each charge remains a separate count. The Commissioner will almost invariably apply this section when charging someone with qualifying TAA offending.

Section 20(2) of the Criminal Procedure Act 2011 (CPA) provides for representative charges. This provision allows multiple offences of the same type to be included in a single count in a charging document if the offending occurs in similar circumstances such that the defendant would be likely to enter the same plea to the charges if they were charged separately, and the number of offences would make it difficult for the court to manage if charged separately but tried together. The Commissioner will consider whether the facts of a case make representative charges appropriate.

In suitable cases the Commissioner may file charges in the alternative or use the included offence provision of the CPA (section 143).

Category 1 and 2 offences are tried in the District Court before a judge alone. All but one of the offences in sections 143 and 143A of the TAA are Category 1 offences. The exception is section 143A(1)(d), which has a potential sentence of 5 years imprisonment, and which is therefore a Category 3 offence.

The Commissioner may publicise convictions for tax offences based on public interest, including deterring future non-compliance, encouraging and reinforcing compliant behaviours and maintaining society's perception of the integrity of the tax and social policy systems.

The Commissioner will periodically review: