However if the first company is not a CFC, the requirement to "look-through" to the second foreign company depends on whether the person uses the attributable FIF income method for that company and whether an exception to the "look-through" rule applies.

If the fair dividend rate, cost, comparative value or deemed rate of return method is used for a FIF, any foreign shares held by that FIF are not subject to the FIF rules (as in most cases the FIF rules only apply to direct interests in foreign companies. (See section EX 29(2).)

If the attributable FIF income method is used for a foreign company, the default position is to "look-through" this foreign company and apply the FIF rules to any shares that the company holds in other foreign companies. This is achieved by the formula in sections EX 50(6) and (7) and is consistent with the previous rules that applied under the branch equivalent method. 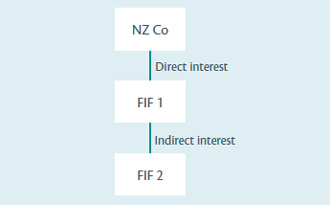 One case where the FIF rules do not apply is when the person's  indirect interest in the second foreign company would satisfy the requirements of the section EX 35 exemption for foreign companies that are resident and subject to tax in Australia (see section EX 50(7B)(c)). For example, this condition could be met when a person owns 20% of a US company that owns 50% of an Australian company (a 10% indirect income interest).

Alternatively, a person will not need to apply a FIF attribution method to a second-tier company if that company has been included in the same test group as another FIF which has applied and passed the active business test when that test is applied on a test group basis (see section EX 50(7B)(a)(ii)). For the FIF and the second foreign company to be part of the same FIF test group the FIF would have to have a more than 50% voting interest in the second foreign company as well as meet several other requirements (see the previous section on the "Requirements for applying the active business test to a FIF test group").

The FIF must first pass the active business test, excluding these additional amounts. It then performs the accounting-based active test in section EX 21E a second time, this time including the additional amounts that are reported in the FIF's accounts and that relate to the FIF's non-controlling interests in other foreign companies. More specifically, for the second test, the following amounts are included in the "added passive" and "reported revenue" items:

The above amounts will be net amounts (so they could be negative). The active business test usually only considers gross amounts. 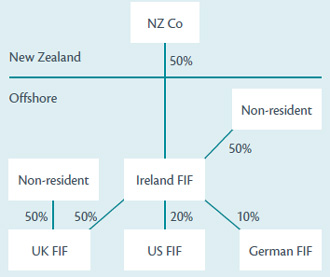 The Ireland FIF has $1,000 of sales income and $20 of interest income and so has a result of 2% after applying the formula in section EX 21E(5). This means the Ireland FIF passes the active business test as an independent company. As a consequence, NZ Co does not attribute income from the Ireland FIF.

NZ Co must now determine whether it needs to apply FIF calculation methods with respect to its indirect shareholdings in the UK FIF, US FIF and German FIF.

It does this by performing the active business test a second time, but this time it adds the amounts that appear in the Ireland FIF's accounts that relate to profits from the UK FIF, the US FIF and the German FIF.

The amounts that go into the formula are total passive of $45 and total revenue of $1,045. This results in a passive income to revenue ratio of 4.31%. Because this result is less than 5%, section EX 50(7B)(b) applies and the investor would not apply a FIF calculation method to the UK FIF, the US FIF or the German FIF.

If this result had been 5% or greater, the NZ Co would be required to apply FIF calculation methods in respect of its indirect interests in the UK FIF, the US FIF and the German FIF. This result only applies for the look-through rule in section EX 50(7B). It does not disqualify the Ireland FIF from being an active non-attributing FIF, so NZ Co would not attribute income from the Ireland FIF.

Alternatively, NZ Co could choose to use a different FIF calculation method for the Ireland FIF (other than the attributable FIF income method). This would mean that income would be attributed from the Ireland FIF, but not from the indirect interests in the UK FIF, the US FIF or the German FIF because the look-through rule in section EX 50(7B) would not come into play.