2012 amendment relating to FIF rules - The branch equivalent method has been replaced with the attributable FIF income method.

In other parts of the Income Tax Act 2007, such as subpart FE, there are references to "a person who uses the attributable FIF income method for a FIF". Note that a person is still considered to use the attributable FIF income method in cases where the FIF passes the active business test. If the person uses a different FIF calculation method such as the fair dividend rate or cost methods to attribute income from the FIF, these references do not apply.

Taxpayers who use the attributable FIF income method for a FIF generally calculate their attributed income from that FIF as though the FIF were a CFC. This means they use the CFC rules in sections EX 18 to EX 21, although some modifications are made to make these rules easier to apply to foreign companies that are not CFCs, as described below.

The active business test is relaxed for persons who apply the attributable FIF income method. This change enables them to use consolidated accounting information to apply the test to related groups of FIFs (including when those FIFs are in different jurisdictions). The accounts can be prepared in accordance with New Zealand IFRS (IFRS), International IFRS (IFRSE) or United States generally accepted accounting principles (US GAAP). Note, US GAAP accounts cannot be used when applying the active business test to an interest of 10% or more in a CFC, and the active business test can only be applied to groups of CFCs if all the CFCs are controlled by the New Zealand person and are resident in the same jurisdiction.

The exemption that applies to payments of interest, rent and royalties from an active CFC to an associated CFC (that is, 50% common ownership) has been modified so that a similar exemption applies when there is a group of persons who control (own more than 50%) of both FIFs. These modifications are explained in the detailed analysis below.

These modifications are made by sections EX 50(4B) and EX 50(7B) and are covered in more detail below.

A FIF will pass the active business test (and so will not have to attribute any income) if it has attributable income that is less than 5% of its gross income. Attributable and gross income, for the purposes of the test, are measured using either financial accounting or tax measures of income. These measures are defined in the legislation.

It is expected that most people will prefer to use accounting measures of income, because they will be more readily available or easier to calculate. Accounting measures may be used to calculate the ratio if they are taken from accounts that comply with IFRS or US GAAP, and certain other conditions are met.

FIFs that are commonly controlled may be consolidated for the purposes of the calculation of the 5% ratio calculation, subject to certain conditions.

Accounting standards that may be used (section EX 21C)

The main requirement is that the FIF's income appears in IFRS or IFRSE accounts. This ensures that, whatever accounting standard might be used by the FIF itself, the resulting income - at least in aggregate - will be subject to an audit that checks for compliance with IFRS or IFRSE.

There are two ways that this requirement can be met.

The FIF's income could appear in IFRS / IFRSE accounts firstly because the FIF's accounts are fully or partially consolidated into the IFRS or IFRSE accounts.

Alternatively, it could appear if the FIF's income is included in the IFRS or IFRSE accounts using the equity method in IAS 28 or IAS 31, or by inclusion of dividends and fair value changes under IAS 39. If the FIF's income is included under one of those standards, the FIF itself must also produce accounts under an acceptable standard, including US GAAP.

Once it has been determined that there is an acceptable set of accounts, information used to prepare those accounts, including underlying information, may be used as long as it is consistent with the relevant standard (see existing section EX 21E(4)(b)).

For instance, if a FIF's income was recognised in the IFRS accounts of the New Zealand investor under IAS 28, and the FIF itself used US GAAP, it would be possible to take the detailed US GAAP information and use this in the active business test calculation in most cases. However, there would be an exception if the associate's profit appearing in the IFRS accounts was not the same as the US GAAP profit because of an adjustment made to ensure compliance with IFRS. In such a case, it would be necessary to adjust the detailed US GAAP information to ensure consistency.

NZ Co has a 30% shareholding in a US company (US FIF) that prepares US GAAP accounts.

The US GAAP accounts report $20 million of profit being earned by the US FIF.

NZ Co has IFRS accounts. The IFRS accounts include a line item for income from associates. This item displays $6 million from the US FIF (30% of the $20 million).

Because the US GAAP accounts are reported consistently in the IFRS accounts, NZ Co will be able to use the information underlying the FIF's US GAAP accounts for the purpose of applying the active business test in section EX 21E to the US FIF. 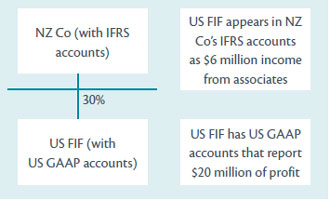 Subsection EX 21C(8) contains the two audit requirements that must be met in each of subsections EX 21C(2) to (7). The first requirement in subsection (8) is that the accounts in question must be audited by a chartered accountant who is independent of the FIF and of the person. In the case of a test group, the chartered accountant must be independent of all the FIFs in the test group.

Under the CFC rules, New Zealand investors that have more than one majority-owned CFC in a jurisdiction are allowed to use consolidated accounts for all their majority-owned CFCs in that jurisdiction for the purposes of the active business test. The purpose of this measure is to simplify the application of the test when accounting information is available at a consolidated level, such as when a group produces segmental reporting by country.

The attributable FIF income method provides a similar consolidation rule for groups of FIFs. This should enable more investors to use the active business test as it may be easier to access consolidated accounting information for an entire group of FIFs than to access information for each separate company.

In cases where the test is applied and passed by a test group or a top-tier FIF that includes amounts from lower-tier FIFs, the investor may not be required to "look-through" the top-tier FIF and apply a FIF attribution method to the lower-tier FIFs. This is explained in the next section ("Applying FIF calculation methods to indirect interests in foreign companies").

The requirements for being able to apply the active business test to a group of foreign companies under the attributable FIF income method are more relaxed than those that apply to a group of CFCs.

The CFC rules also require all the CFCs to be in the same jurisdiction in order to apply the active business test on a consolidated basis to a group of CFCs. Under the attributable FIF income method, the foreign companies can be in different jurisdictions. However, none of the foreign companies can be a CFC (an actual CFC, as opposed to a FIF that is treated as a CFC because of section EX 50).

Finally, the CFC rules require the investor to remove amounts corresponding to income interests not held by the investor (such as minority interests). The attributable FIF income method omits this requirement so amounts belonging to other investors are included in the calculations. This concession is purely because of concerns about the practical difficulties for a non-controlling shareholder in identifying amounts attributable to other shareholders.

The above modifications to the CFC rules occur through sections EX 50(4B) and EX 50(7B).

As a consequence, when applying section EX 21D(1) to a FIF that is using the attributable FIF income method, that section should be read as follows (replacement text in italics):
A person (the interest holder) with an interest in a FIF may choose to apply this section for the FIF as a member of a group (a test group) if the group consists of companies-

When applying section EX 21E(2) to a FIF that is using the attributable FIF income method, that section should be read as follows (replacement text in italics):

Note the top-tier FIF must hold a more than 50% voting interest in each of the underlying FIFs. 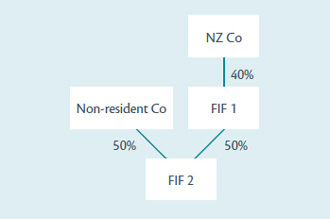 In this example, NZ Co would not be able to group together FIF 1 and FIF 2 for the purposes of applying the active business test because FIF 1 does not hold a voting interest of more than 50% in FIF 2.

Unlike CFC test groups, FIF test groups are not required to remove (subtract out) amounts that correspond to income interests held by other shareholders. This is achieved by sections EX 50(7)(f) and EX 50(7)(j) which omit these CFC requirements for FIF test groups.

FIF 1 and FIF 2 apply the test as a consolidated group. Although FIF 1 only owns 80% of FIF 2, 100% of the relevant amounts of FIF 2 can be included when working out the formula for the FIF test group under section EX 21E(5). 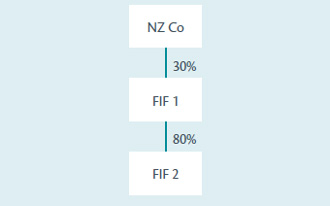