2012 changes to the FIF rules around attributable income.

Similar provisions in sections CQ 5(1)(c)(v) and DN 6(1)(c)(v) prevent income or loss arising from interests in FIFs that satisfy the requirements of the Australian exemption in section EX 35.

Section EX 20B(3)(a) mirrors section CW 9(2) by attributing income from CFCs and FIFs which use the attributable FIF income method in respect of those dividends that would be taxable if they were received directly by a New Zealand company. The previous section on the foreign dividend exemption has more detail on how section CW 9(2) operates.

Subsection EX 20B(3)(m)(ii) of the Income Tax Act 2007 deems certain telecommunications services income to be attributable income to the extent to which the equipment is owned by "the CFC or by another CFC that is associated with the CFC". This subsection has been amended so it also covers situations when a CFC (or a FIF using the attributable FIF income method) is associated with any CFC or FIF. In the absence of this change it would be possible to reduce a foreign company's attributable income by dealing with an associated FIF that is not a CFC.

Under the existing CFC rules, there is an exemption for interest, rent and royalty payments between associated CFCs so long as both CFCs are in the same jurisdiction and the CFC that makes the payment is a non-attributing active CFC (in other words, it passes the active business test).

While the CFC rules require the two CFCs to be associated companies, the attributable FIF income method requires both FIFs to be commonly controlled by a group of persons that hold more than 50% voting interests in both companies. This is achieved by section EX 50(4C) in conjunction with sections EX 50(4B)(a) to (c).

Section EX 50(4C)(b) requires the foreign company that makes the payment to be a company that would be a non-attributing CFC or FIF. When determining whether the CFC or FIF is non-attributing, the exclusions in sections EX 20B(5)(c)(i), EX 20B(7)(c), and EX 20B(12)(a) as modified by section EX 50(4C) are ignored. This is necessary to avoid a circularity problem whereby the status of the paying company cannot be determined, because that company itself needs to apply the same exclusions.

Section EX 50(4C)(ab) requires there to be a group of persons with more than 50% voting rights in both foreign companies.

Section EX 50(4C)(c) requires both foreign companies to be resident and subject to tax in the same jurisdiction.

Interest, rent or royalty payments in examples 1, 2 and 3 would be not be attributable income of the FIFs that receive those payments. 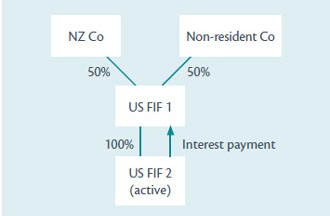 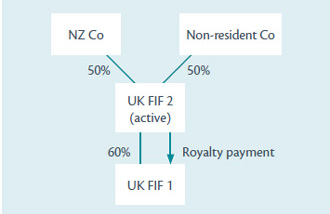 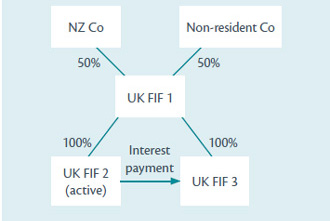 The payment in Example 4 would be attributable income of the US FIF as the person (NZ Co) does not use the attributable FIF income method in relation to the US company that pays the interest, rent or royalty (in fact they do not even have an income interest in the company that makes the payment).

The payment in Example 5 would be attributable income of UK FIF 1 as UK FIF 2 is not controlled by the same persons as UK FIF 1. 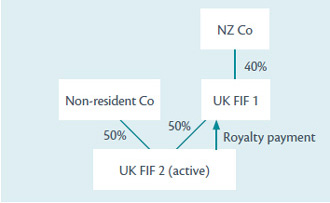 These rules have been modified to reflect the fact that such payments may now be deductible when paid by a FIF for which the person uses the attributable FIF income method.