2005 amendment introduces a tax discount to encourage taxpayers receiving self-employed or partnership income to pay tax in the year before they pay provisional tax.

As part of the government's growth and innovation strategy, proposals were considered to reduce the costs faced by small businesses in complying with the tax system. One such proposal involved providing a discount of tax to individuals who voluntarily pay tax in the year before that in which they are required to pay provisional tax, thereby aligning the payment of tax with when income is earned. The proposal aims to reduce the number of taxpayers who get into debt with tax payments and thereby reduce the compliance costs incurred.

Who qualifies for the discount?

To qualify, individuals have to:

Once they have made a voluntary payment they must keep the lesser of the following in their income tax account until terminal tax date for the income year:

Those who are provisional taxpayers before they begin receiving self-employed or partnership income will not be entitled to the discount as they do not face two years' tax payments in their second year in business and are already aware of the need to make provisional tax payments.

The discount is not available when a taxpayer merely ceases paying provisional tax. For example, a business that derives assessable (gross) income but is in a tax loss situation would not qualify for the discount.

Do you qualify for the discount? 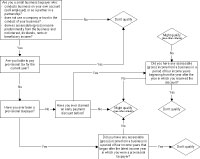 A concession in the new legislation enables taxpayers to claim the discount again if they have ceased deriving partnership and self-employed income for a period of four years and then begin a new business. This is because taxpayers who have been out of business for some time, (four years) may be less aware of the problem that two years' worth of tax will become due in their second year in business.

Individuals will be able to choose whether to receive the discount in their first year of business or in a subsequent year, but they must claim the discount before the year in which they begin paying provisional tax, when qualification ceases.

The discount will be calculated at the rate of 6.7% of the amount paid during the year or 105%of the individual's end-of-year residual income tax liability, whichever is the lesser. Any overpaid tax plus the discount will be refunded to the taxpayer or can be offset against other tax owing.

When a taxpayer claims the early payment discount in a tax year and the return is reassessed for that year, the amount of the discount may also be reassessed.

Examples of who will qualify for the discount

Angela derives solely business income for a four-year period. The business grows, and in the third year her residual income tax liability (tax not deducted at source) exceeds $2,500, so she becomes a provisional tax payer. She is required to pay provisional tax in her fourth year in business.

Angela can claim the discount once in either of the first three years, as she is not required to pay provisional tax. However, she would maximise the benefit of the discount by claiming it in the third year in business. If the discount has not been claimed before the fourth year entitlement ceases.

John does not operate a business in years 5 to 8 and begins business again in year 9. He can claim the early payment discount because he has begun business after a four-year gap since he was last in business and last paid provisional tax.

If, however, he had continued to be liable for provisional tax in years 5 to 8 he would not be able to claim the early payment discount.

Mary begins as a self-employed consultant and, although she is not liable for provisional tax, makes voluntary payments of income tax in her first year and claims the discount in her end of year return. However, in year 2 her business ceases. Mary is then employed and stays in that job for 5 years. In year 8 she takes up

Tom enters a partnership and in the second year he is required to pay provisional tax. In year 3 he leaves the partnership and is no longer required to pay provisional tax in the following years. He takes a five-year break travelling overseas. On returning to New Zealand he decides to become self-employed. He makes voluntary payments of tax in his first year of self-employment and therefore qualifies for the early payment discount.

This amendment applies from the income year beginning 1 April 2005.